Made for Metroidvania Month 14

Help this ant to take back his home which was attacked by aliens.

This game is made using the fantasy computer TIC-80

OH WAIT XD. bruh. for windows 32 bits. its posible to compile or really its for 8 bits?? xd.

but i still like your game (played a little bit online)

I don't know bro, it looks like this game engine doesn't allow compiling to 32-bit, sorry :(

When there is more than 0 enemies on board, the horrizontal movement speed goes to like half speed or something.

feels like moving through mud.
each frame the game is like "Huh, hes preresssing the key and wants me to move? lets wait another frame if he doesnt give up"
"still pressing that button? oh well might move a tad to the right. then ask me again"

seems that was an issue with online lag and such as the downlaod version runs fluid :-)

I'm now up to the final boss, thought my upside down bow shooting would take him down but the 2 hit flames ruin that plan :-)

just beat it. nothing a little weapon swapping cant solve :-)

thank you for sharing your experience. Glad if you like it :D

I died when I defeated the gravity robot thing by falling out of the game, but I think I enabled the zero gravity ability before that happened, so when I revived, I was upside down and couldn't really do anything. When the player dies, reset the gravity.

thanks for the feedback. I almost forgot about that.

I played the game through safari on mac. I reloaded the page twice and all sound seems to disable after a short while. Its really nice overall and I personally like this kind of fast responsiveness of control a lot

I'm sorry I didn't know that bug because I've never used Safari on a Mac, but I'm sure it's the game engine's fault.

thank you, glad to hear that.

Nice work! I like the way you implement the HP refill and the save thingy, feels so satisfying when I walk through them.

The large monsters need so many hits to be killed. I almost gave up thinking I was doing something wrong. They seem to need something like 50 hits.

thanks for the feedback, I'll make it easier for the next update.

when i was still on the way to the second upgrade this kind of (falsely) remeinded me of that shitty 19xx castlevania gam with the guy wipping that one pixel in front of him, running to the right and just killing the same enemy over and over. (those old games were really bad. hate them. just like thos euseless endless coin collecting runners, aka every single early arcade game ever)

just felt like it at the start, with defeating a ton of tanky bulls. and then going on to defeat the same bull over and over, jsut in red and double the hp.

gladly I was wrong, game got good after that.
just a bit too short :-) 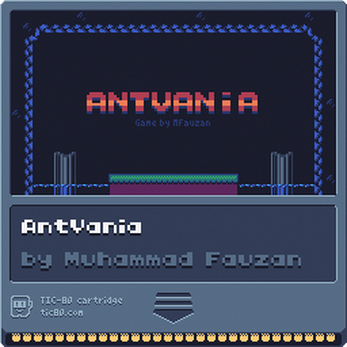